We have planned on having Abriella and Colby sharing a room and giving the baby Colby’s old room. That way, we can keep our guest room. We purchased bunk beds and Stephen put them together a few weeks back. Â This are the beds we got. 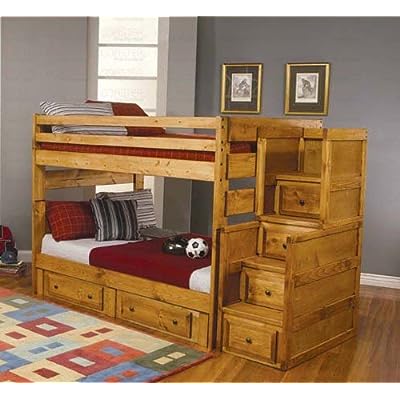 They are full over full bunk beds and have stairs instead of a ladder. Seemed better for younger kids to us, plus we can separate the beds one day and have 2 full sized beds. (This is not how theirs are decorated, mind you). Yay!

Well, Abriella has been sleeping on her top bunk since we put the beds together. She’s loved it! Colby had absolutely no interest in sleeping in there once the beds were together. No desire whatsoever. There was the issue of their sound machines being different sounds (waterfall vs rain). Then, Colby wanted the door open for some reason. We could not figure that one out as neither have ever had their doors left open. Plus, he’d be going to a bigger bed with a pillow and blanket. He still sleeps without both of these despite our efforts to get him to add them.

So, we decided that we’d give him until the end of the year and then we’d have to make the transition, whether he was willing or not. We still have to get the nursery ready, but more than anything, we wanted them to have time to get used to it.

Well, last night, we had a loud thunderstorm. Colby ended up in the bed with us. That lasted for a little while, and then the storm seemed to die down (ended up just being a lull and it got much noisier later), so I was going to take him up to his bed. I cannot sleep with a child in my bed, even though he was being really good. But, I get up 50 times a night right now and it’s a major ordeal to change positions with my ever-expanding belly. So, I wanted to get him back to his bed ASAP. Well, Colby was not thrilled with this idea. So, Stephen said that he’d take Colby up and sleep with him in his bed in sister’s room. Colby was agreeable to this (surprising in the middle of the night). So, that’s what occurred. Nobody got great sleep, but everyone did sleep.

So, today we weren’t sure how this turn of events would impact the night’s sleeping arrangements. Colby was excited all day about his new bed, though! He wanted to nap in there, too…with me sleeping in there as well. HA! No way! So, I convinced him to sleep in his old room. We still haven’t figured out what we’re going to do about the napping since his sister doesn’t nap and he does, and she loves to be in her room reading and playing.

Anyway, evening came, and he was talking about the new bed and one of us sleeping in there, too. We told him that he could sleep in it by himself with sister in her bed. He kept asking about us sleeping in there, but we’d tell him that we couldn’t. Well, he excitedly turned on his sister’s sound machine, he climbed into his bed, laid on his pillow, asked for a doll (we gave him my old sock monkey—this is also different as he never has slept with anything), and wanted both him and the sock monkey covered up with the blanket. Â Abriella was excited about him staying in there again as well.

It is currently 3 hrs since we closed their door and we have not heard A THING!! What?! Could it really go that smoothly?! Here’s to praying for them to sleep all night long. Seems that maybe that storm brought more blessings than just rain!!

He lasted 6 hours, and then started crying, and Abriella came out of the room and said that Colby was upset. Stephen went up and Colby said he wanted a “different bed.” Stephen decided to just let him go back to his old room for the rest of the night. Probably could’ve talked the buddy into staying in the new bed, but no biggie. Â Today, Colby said that he’s going to stay the whole night in the new bed. We shall see. Six hours of quiet (with nobody coming out or crying) was way more than we expected!!

This entry was posted in Abriella, Colby. Bookmark the permalink.